A hectic weekend of fundraising kicked off with Friday’s race night, which was a massive success as the Juniors near the end of their fundraising efforts which have been non-stop since they qualified in October.  The magnificent total of £1,070 (after all costs) was raised throughout the evening, with funds boosted by a draw for 2 Manchester United tickets, a raffle and finally, donations on the night.

Many thanks to Ron Comber for the United tickets and everyone (too many to mention!) who contributed prizes and cash donations, including a number from somewhat flush members after their exploits on the GG’s and the final race, which involved racing pigs….! 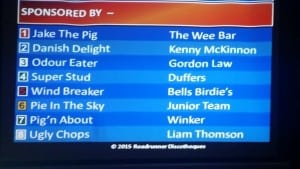 Of course, these events wouldn’t work if it wasn’t for the members, guests, friends and family who came long and importantly dug deep into their pockets to support the Juniors – many thanks to you all – hopefully some of you came out ahead at the end (even after the extra donations)!

Then it was on to Asda for a bag-packing event on Saturday, with another £430 raised there – as always, the ladies section were to the fore in keeping things running smoothly, so thanks to Sheila Cowie, Margaret Meldrum and Alison Wilson for their continued sterling efforts.   Oh, and let’s not forget Tom Flannigan and Peter MacMillan fresh from playing at Bookie’s Runners the night before!

All in all, £1,500 raised over the two events over the weekend, which is quite simply, AMAZING.

We’re almost there and with only 4 weeks to the event, our planning for the trip is coming together nicely.

We’ll be bringing you more news as the big day gets closer.

Many thanks again to everyone involved.