One of the Club’s young players, Owen Abu-Baker, has added another two trophies to his growing collection.

Last week saw Owen pick up the silverware at Dalmahoy, where he won the SG Foundation under 12 event with a scratch 71 from the red tees.  Here’s Owen being presented with the winner’s medal by Scott Knowles of the SG Foundation. 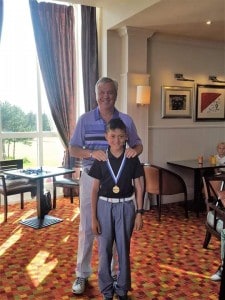 Then it was on to St Andrews for the New Club’s Juvenile Championship, which was played over the Strathtyrum Course – Owen came through 3 rounds against older players, all with lower handicaps than him, to win the Championship, so a great outcome at The Home of Golf. In true fashion at St Andrews, Owen had to change into his best gear to receive his well deserved prize.

Congratulations from all at Uphall Golf Club!

We have a great Junior Section running at the Club, so come along and get involved.