A week past Friday saw the junior prize-giving being held in the newly refurbished lounge area, which also served as a mini-golf area for the evening.

It was great to see so many junior members and parents joining in what was a real fun evening, where putting and chipping skills were put to the test. The House Convenor will be glad to know that no remedial work is needed as rubber balls were in use!

On the presentation front, Jack Cummings was crowned junior champion for the second consecutive year, with Craig Tibbetts runner-up.

Scott McKinnon Jnr, Craig Tibbets and Euan Valentine performed consistently well throughout the season, with 4, 4 and 3 victories respectively, including for Euan the dubious honour of winning the Adult and Junior Trophy alongside Junior Convenor, Peter Macmillan – Euan must’ve played well! 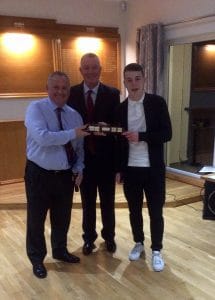 Both Jack and Craig have now moved into the adult section, where we look forward to seeing them renewing their rivalry in the major competitions and no doubt pushing hard for places in the men’s representative teams.

Jack’s final act in the junior section was to hand over responsibility as junior club captain to Scott McKinnon Jnr, who we wish well in his new role, as we continue to build on previous achievements.

Club Captain, Gordon Law spoke about the junior coaching programme for the coming year and the new structure this will follow, which generated a lot of interest. It was really encouraging to have several parents signing up their youngsters on the night.

Lots of the younger members were successful in picking up some prizes at the Mini Golf events – here’s a few of the lads receiving their golf balls from Gordon.  Smiles all round – although don’t get used to getting free golf balls! 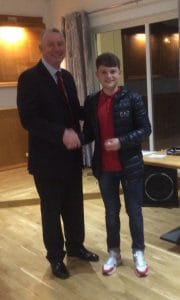 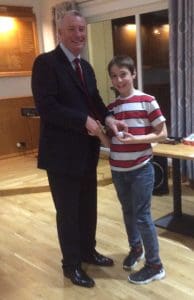 To finish off the evening, we all enjoyed a great buffet prepared by AP Catering – many thanks to Anne and her team.

These events don’t organise themselves, so grateful thanks to Sheila Cowie, Tom Flannigan and Anne and Anne Brotherstone, plus, as always, the junior support team who continue to show great enthusiasm to help our young golfers develop.

We look forward to another successful season for the junior section, both on and off the course.