The following day Graeme Stevenson equalled the course record with an excellent 61 which contained eleven 3’s & seven 4’s, it was also Graeme’s first ever bogey-free round, and it meant he led the qualifying by no less than 10 shots from Alan Moffat; he also won the Kenmar Trophy for the lowest net aggregate over the 2 days. The cut fell on 151 which meant defending champion Craig Beveridge missed out on countback to Stewart MacBride.

Dave Young’s 9 at the last meant he missed by 1, although he had the consolation of being the leading qualifier in the 2nd class on 152, and last year’s Junior Champion Jack Cummings also took 9 at the last to miss by 2. The 3rd class leader on 170 was Scott Logan.

In amongst all of that, Tom Mathieson had a hole-in-one at the 7th!

The Club’s hole-in-one fund has taken a bit of hit and keep an eye out for all these Hugo Boss watches too.

We were blessed with excellent weather for the matchplay stages which began on Monday night with the semi-finals on Thursday deciding the finalists. The leading 2 qualifiers made it to the semi-finals and were up against 2 opponents more senior in age (very politically correct!).

Following convincing wins over Jim Kinniburgh & Kenny McKinnon, Willie Nisbet birdied 4 out of 6 holes from the 11th to the 16th to turn around a 1 hole deficit and defeat Graeme Stevenson by 3&2.

Coincidentally,it was the 2nd year in a row where the leading qualifier who had equalled the course record in the qualifying rounds lost out in the semi-finals to the eventual winner, Colin Swanston losing out to Craig Beveridge last year.

In the other semi-final Davy Meldrum, who had beaten Stuart Loch & Scott McKinnon en route, beat Alan Moffat by a 3&1 margin, the highlight of the match was a 45-footer holed across the green at the 16th for Davy to remain 2 up, just 2 nights after a similar length putt had seen off Scott McKinnon on the 18th green.

This meant that for the first time the final would be contested by 2 seniors and Davy, who had turned 70 at the start of the month, became the oldest ever finalist by some margin and would be going for his 6th title,having won 5 times between 1976 & 1987.

In the 2nd class semi-finals, the possibility of an all Young final was ended when brothers Dave & Kenny both lost, to Derek Easton & Andy Grant respectively.

Finals day was dry but extremely windy with gusts up to 40 mph.  In spite of this, the 2 finalists produced golf of an excellent standard.

In the morning the first 3 holes were halved in par before Willie took a lead on the 4th which he would never relinquish.

A birdie at the 6th put him 3 up before a 3 putt at the 9th reduced his lead to 2. Another birdie at the 12th took his lead to 3 before Davy bogeyed the 13th which extended the lead to 4. Willie then let Davy off the hook by 3-putting the 14th to only half the hole before his bogey at the 15th, and Davy’s excellent 2 at the 16th, reduced the gap to 2 holes. However an uncharacteristically poor tee-shot from Davy at the 17th went out of bounds and although he scrambled a 5, Willie’s par put him 3 up again; the last was playing tough into the strong wind and a half in 5 left Willie 3 up at lunch.

Davy started the afternoon round in a determined fashion and after winning the 1st with an excellent 4, he also won the 2nd after Willie’s pulled tee shot careered through the 18th green into an awkward spot almost in the burn; from there he could barely move the ball and Davy’s 4 was good enough to reduce the lead to 1.

The next 3 holes were halved in pars before Davy played a poor pitch shot at the 6th into the right hand bunker, this cost him a bogie and Willie’s lead went to 2 again. After this a remarkable run of 9 halved holes in a row ensued, highlighted by excellent saves for 4’s by both at the 10th and the 14th, and Willie stood on the 16th tee still 2 holes to the good.

With the wind at its strongest and howling across from right to left Willie played the shot of the day to within 3 feet of the back left pin position and after Davy’s chip from just left of the green narrowly missed, Willie rolled in his putt for his 1st Championship victory.

Both players conducted themselves in an exemplary fashion and considering the conditions the golf was of a fine standard; Willie’s win was well deserved and after knocking at the door for a few years he is a worthy champion.

The 2nd class final went all the way to extra holes, Andy Grant led by 1 playing the last but was unable to close the game out and Derek Easton’s par at the 2nd extra hole was enough to secure the victory.

The ladies scratch championship was won for the 5th time by Alison Wilson defeating Susan Watkins 2&1 in the final while Emma Cassidy claimed the handicap title with a 3&1 victory over ladies captain Anne Brotherston.

Finally the juniors championship was won by Owen Abu-Baker at the age of 12, beating Sean Byron 6&5 in the final.

Back in the relative calm of the Clubhouse and once everyone had got rid of their windswept looks, Gordon Law, Captain & Andy Stevenson, Vice-Captain said a few words and made the presentations to the  winners and runners-up.  Scroll to the end for a selection of photographs kindly taken by Marion Millar and Evelyn Rogers.

It was another thoroughly enjoyable week, congratulations to all the winners, and to everyone else, there’s always next year! 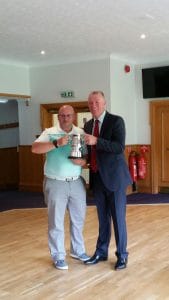 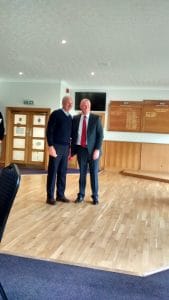 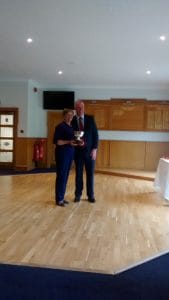 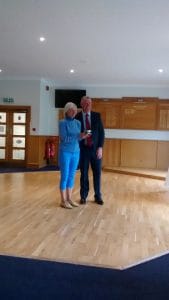 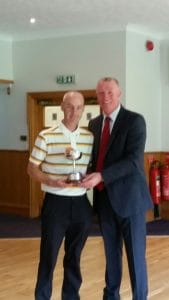 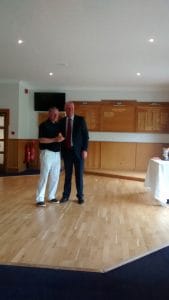 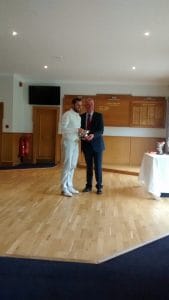 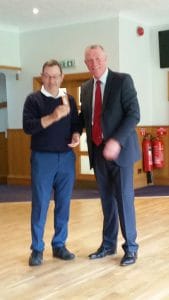 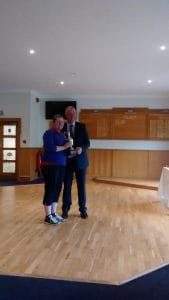 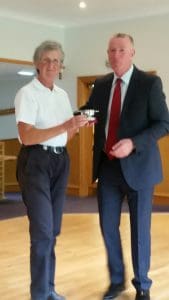 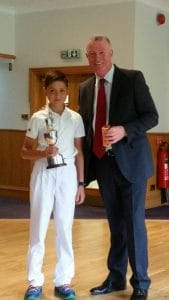 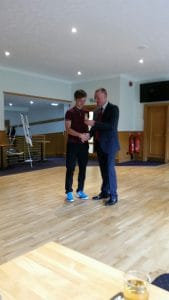