The team played out a hard fought halved match (3-3) with Greenmeadow from Newport,  Wales, yesterday and in the true spirit of golf, the teams ended 7th equal. 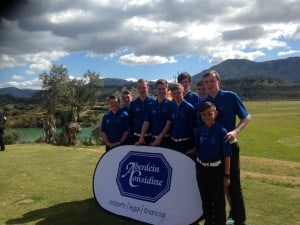 The tournament was won by the Vale of Glamorgan who defeated Murrayfield 4-2 in a close match.  This was the second time “Vale” had lifted the trophy – congratulations!

The week was rounded off by a gala presentation dinner where the boys and the management team were entertained by after dinner speakers including Olympic Gold Medal winner, AllanWells. 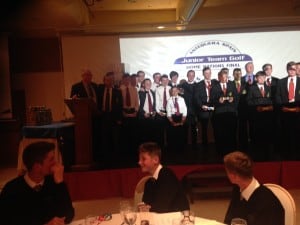 The whole squad have conducted themselves in a manner befitting the Club.  Naturally, some are disappointed with the way they played and for the team not to have done better, but all of them have really enjoyed the experience.

There’s no doubt that they will all take lots of positives from the trip and be able to use these to their benefit in not only their golfing exploits, but as they move forward generally.

Finally, thank you to everyone who’s supported the team in their efforts in the tournament, from the qualifying stages through to Andalusia – the boys and everyone involved are very grateful for everything you’ve done.

4 thoughts on “Andalusian Adventure draws to a close”